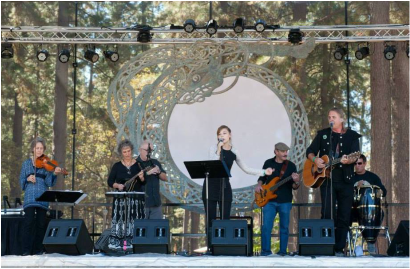 Ha’Penny Bridge is a Northern California Celtic music band comprised of several musicians from the Chico, California area. Its dynamic, vocal-driven sound has been described aptly as “California Celtic” due to the band’s unique repertoire and arrangements of Mark McKinnon’s original songs, its stirring adaptations of classic and contemporary Celtic-style ballads, and creative infusion of traditional Irish and Scottish tunes.

During its thirteen-year existence, Ha’Penny Bridge has garnered a reputation as one of Northern California's strongest and most exciting Celtic music bands, including one of the Chico area’s most popular bands. At the very beginning of its existence, the Chico News and Review praised it as one of Chico’s hottest up-and-coming bands, and during its successful appearances at the prestigious KVMR Celtic Festival in Grass Valley in 2008, 2009, 2012, 2013 and 2016 Ha’Penny Bridge was hailed for its “rapid rise as one of the North State’s most popular bands” that has “garnered a large and enthusiastic following of music lovers of all ages drawn to the group’s powerful, ensemble-style playing and ringing vocal harmonies.” Since 2009, the band has also been a perennial nominee for a Chico Cammie Award as Chico's best world music band, performing (to rousing standing ovations) at acclaimed Chico World Festivals, headlining Sacramento's St. Patrick's Day Parade and Festival, and Feather Falls Casino's St. Patrick's Day Grand Opening celebration, and, among its many other performance venues in Northern California, was honored to open for esteemed Irish artists Karan Casey and John Doyle at Sierra Nevada Brewery's Big Room .

Ha’Penny Bridge comprises a lineup of Chico-area musicians with a rich, cumulative pedigree in Celtic and corollary genres. With a frontline of Molly Paul and guitarist Mark McKinnon on vocals, the band includes Jewel Cardinet on mandolin, Vita Segalla on fiddle, Tom Haber on bass, Michael Cannon on keyboards and accordion, Jerry Morano on percussion and Bo Bowen on whistles. The band's versatile range of talent also allows it to tailor its size and sound to fit any size venue and event.

In 2008, Ha’Penny Bridge released its first studio CD album of original songs, The Awakening, which the Chico News and Review praised for "being true to (its) musical roots in sound, structure and lyrics," and described as "comfort food for Celtophiles...in the key of Van Morrison or Mary Black" and  has received steady airplay on Chico’s KZFR; the band has been thrilled and honored as well by the very positive responses from the community. Ha’Penny Bridge released its most recent CD of original, Celtic-style songs and tunes, At Fiddlers Green in April,  2012; the band was honored that the album immediately received such widespread praise as "Songs on the sophomore effort [the new CD] At Fiddlers Green showcase how much the band has grown since [Mark] Mckinnon formed Ha'penny Bridge in 2006" (Chico Enterprise-Record), and
"I like this album a lot... I’ve listened to it so often already that I can’t get some of its tunes out of my head, which is a real credit to Mark, who wrote all the songs but one, and to his band, which plays and sings them with affection and skill. Good music begins with good songs, and Mark has an Irish poet’s feel for lyrics and story telling and a California musician’s ability to wrap them in sweet melodies... Some of the songs, like the title tune, are rollicking, and others, like the gorgeous “Holy Ground,” are elegiac. There are love songs (“I Went Out Walking”) and political love songs (“The Running Man”) and even a cowboy Celtic song (“The Blue Winds of Summer”). Give these tunes a couple of listens, and you’ll be humming them in your dreams, guaranteed" (Chico News and Review) and via local airplay. Both CD's can currently be purchased online at CD Baby, Amazon and iTunes.
Plans for recording a third CD of new Mark McKinnon compositions are currently in the works.

Mark McKinnon
Founder of Ha’Penny Bridge and its guitarist-vocalist, Mark’s first journey to Ireland in 2001 transformed his life dramatically, resulting in his decision to put down his Stratocaster, pick up his Taylor and play Celtic music. Upon his return to the States, he was surprised to discover that his songwriting had undergone a dramatic metamorphosis from rock/folk/world styles to a singular fixation on Celtic themes, history, mythology and a fusion of traditional-world melodic structures. Frustrated by his inability to find an avenue to sing Celtic songs in Chico, he formed his “dream band,” Ha’Penny Bridge, with four members of Chico, California's Pub Scouts and other musicians from outside the Celtic community. His numerous songs written over the last several years comprise most of the band’s repertoire and are featured on the band's two studio-produced CD's.  When Mark isn’t singing and playing guitar with Ha’Penny Bridge, he can often be found playing bodhran in Pub Scouts sessions, or dreaming of returning to Ireland’s west coast to sing and play music.
​
Molly McNally Paul
Named Chico's best female vocalist in Chico's 2009 Cammie Awards, Molly’s chance meeting with Mark McKinnon in 2006 not only resulted in their forging an instantly strong, harmonic bond as Ha’penny Bridge’s singers, it also introduced this gifted vocalist to the world of Celtic music for the very first time.
From the very beginning, as she drew on her previous experiences of singing folk and gospel music, her bandmates knew her voice was a galvanizing force to the band’s material (as can be heard on the band's first two CD's), especially her lilting harmonies, which add a strong flourish to the band’s unique musical signature. Most importantly, though, Ha’penny Bridge’s enthusiastic audiences are drawn to and mesmerized time and again by Molly’s radiant stage presence and lovely voice which course gracefully through the heart of Ha’penny Bridge’s performances.

Jewel Cardinet
As the band’s mandolinist, Jewel’s ability to play melody lines as well as provide driving rhythm is a very special addition to its sound. Among her collection of vintage Gibson “A”-style mandolins is her favorite for performance: a 1923 Lloyd Loar-era “snakehead” Gibson.  Jewel is a longtime Chico resident, veteran member of the Pub Scouts, and fixture at Lark in the Morning Music Camp, whose unbridled love for Celtic music and vibrant playing are key elements to Ha’Penny Bridge’s onstage personality. She also loves to visit Ireland whenever possible and is a welcome addition to pub sessions when she is there.

Michael Cannon
Founder of the renowned and longtime Celtic band The Pub Scouts, Michael Cannon has become a Chico musical tradition in his own right. His passion for Celtic traditional and contemporary music resonates in his accordion playing, which has been heard all over Northern California, including  Lark in the Morning Music Camp, for nearly two decades, influencing many musicians to embrace and play “trad” music with the same lifelong joy that Michael does. His celebration of the music of Ireland, Scotland, Wales and all places Celtic extends well beyond Northern California to musicians worldwide, many of whom have not only performed in Chico at his behest, but have returned for the hospitality and good cheer generated by Michael’s generous spirit. His influence on Ha’Penny Bridge’s tight ensemble playing and sound signature is profound and immeasurable.

Tom Haber
Tom grew up playing bass in Berkeley garage bands in the Sixties and credits Phil Lesh as his earliest and biggest musical influence. Over the years, he developed his skills as a member of several blues, rock, country, and swing bands. He was introduced to playing Celtic music when he was asked to join Ha'Penny Bridge in order to provide strength to the band’s “bottom end.” The results have been a perfect fit: his great ear, versatile sensibilities and his instant embracement of Celtic-style music have become one of the band’s greatest assets. In turn, Tom claims that his Ha’Penny Bridge experience has triggered an exciting and unexpected musical renaissance in his life.

Vita Segalla
Vita Segalla, originally from Connecticut, has played the fiddle for much of her life.  Her primary emphasis is now on Celtic style music. She has played in many Celtic, contra dance, and contemporary bands over the years, including The Pub Scouts. Vita has also appeared with Sweet Journey at the California World Music Festival in Grass Valley and at the Chico World Music Festival in 2006, and her highly valued versatility on her fiddle has been a featured attraction in various Chico-area theatrical productions. She says that Ha'Penny Bridge is an exciting band for her due to its unique blend of Celtic and folk styles, and because its uptempo sound offers many opportunities for her to explore creative nuances on her fiddle.

Jerry Morano
The band still pinches itself at its good fortune to have Jerry Morano in the lineup. This celebrated percussionist is perhaps the hardest working musician in the Chico because he is in such great demand to add his percussive magic to each and every song he plays on. Honored for a Lifetime Achievement Cammie award, Jerry adds nuance, texture and drive to the band's music and rarely plays any song the same way twice, which constantly has his Ha'Penny mates grinning onstage. There is no doubt that when he joined the band, he kicked everyone's playing up a notch.